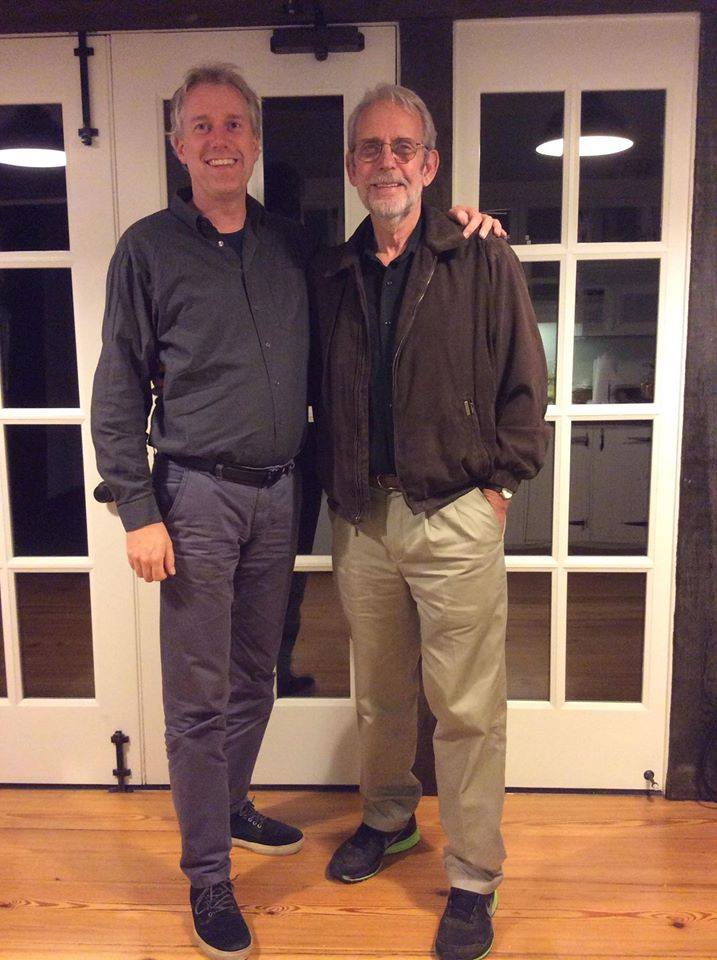 World famous film editor Walter Murch, was in the midst of editing a film when I had the fabulous opportunity to join him on the Skywalker Ranch. So for me the first week of February 2014 turned out to be an unforgettable week, a dream come true.

Walter Murch
Walter Murch has a long record of awards and nominations and has won three Oscars, three BAFTA’s, two Eddie Awards and many others He is famed for his image editing as well as his sound design and is the only person ever to win Oscars for both sound mixing and film editing for the same production (The English Patient). Murch has worked on classics like The Godfather trilogy, Apocalypse Now, The Conversation, The Unbearable Lightness of Being and The Talented Mr Ripley, with directors like Francis Ford Coppola, Philip Kaufman, George Lucas and Anthony Minghella. During his career, editing evolved from the early days of cutting with scissors, losing an entire frame to each edit, to splicing blocks in the 1970s, losing only one sixteenth of a frame. This was due to a technique invented and further developed by Walter Murch that applied a modification which concealed the splice by using extremely narrow but strongly adhesive strips of special polyester-silicone tape. He called this “N-vis-o.” He is also widely acknowledged as the person who coined the term Sound Designer (for Apocalypse Now.) Together with colleagues he has developed today’s standard film sound format, the 5.1 channel array, helping to elevate the art and impact of film sound to a new level. His book “In the Blink of an Eye” (1995) is compulsory course material today at any film academy for anyone who aspires to become an outstanding film editor. In short: Walter Murch is a visionary and a major presence in the history of film.

Invitation
I met Walter Murch in Belgium in October 2011, where he was giving a four-day workshop for Belgian filmmakers during the Ghent film festival.
I managed to be invited to the workshop, which turned out to be a most extraordinary experience, but the experience did not end at the workshop: We kept in contact by email and at the end of 2013 I was invited to visit him on the famous Skywalker Ranch, owned by George Lucas. Home to Lucasfilm’s celebrated audio postproduction facility, Skywalker Sound.
At the ranch Walter Murch was editing his latest movie Tomorrowland, starring George Clooney and directed by Brad Bird, who has earned his reputation in animated cartoons like The Simpsons, The Incredibles and Ratatouille. Tomorrowland was shot in Spain, France and Vancouver, Canada, with initial editing taking place in Vancouver.

Skywalker Ranch
Many fans of George Lucas’ work (Star Wars, Indiana Jones, etc.) would give their right arm to have a single look at the Skywalker Ranch. However, admittance is exclusively reserved to workers and filmmakers. Tours and viewings are simply not organised. Arriving at the gates it was very clear to me how unique this Ranch is and how exceptional it is to have permission to enter Straight away I was presented with the rules and regulations: Always enter the Ranch with a guide, pictures are only permitted outdoors and have to include yourself, no photographs inside, etc. etc.
The Ranch is made up of several buildings and I was expected in the stable house, a building furthest away on the estate which houses the editing hardware. On my arrival the film production company presented me, -obviously straight away, with a “non-disclosure agreement”. But I also got a permit to enter the ranch and drive round by myself.

Method
After I shook hands with Walter Murch again, I was introduced to his team his assistants Dave Cerf, his son Walter and vfx-editor Mitch Glaser straight away made me feel part of the team and throughout my stay these people gave me a look behind the scenes, with greatest pleasure and without any reservation. After this welcome we entered Walter Murch’s editing room, a large and pleasant room that exudes a fabulous sense of peace. The first thing he told me was that he always very carefully considers the arrangement and positioning of his equipment and accessories. One wall featured the script worked out on coloured filing cards and papers with shots of scenes printed in photographs. On another wall detailed notes were put up. He explained to me in great detail the way he will read the script, how he makes notes in it, how he converts the script into the filing cards on the wall, and how important this way of working is for his practice.
For every take of a shot of the film, a number of carefully chosen screenshots is made which are automatically incorporated in a database that also files annotations of all disciplines. Next I held the printed records from this database in my hands and I could quietly read and examine all entries by the director as well as Walter Murch’s notes on his spotting sessions of the dailies of the film.

Editing Tomorrowland
The week of my visit was an important week for editing. It was the week of the very last days of production and the penultimate week of “the editors cut”, the edit of the complete movie, all done by the editor without involvement of the director.
The takes ratio at 1:70 is enormous, according to the first assistant and the team worked for almost six months on this editors cut. A working day mostly lasts around twelve hours. This is common practice for all involved. The number of vfx-shots (real shots containing vfx material as well completely vfx-shots) is about three-quarters of the total number of shots in the final film. Because of this a vfx-editor is continuously present, who, starting from the notes by Walter Murch, will integrate the previs-shots into the edit. Because of this large number of shots it is of major importance that this editors cut is as good as possible right away, even to such an extent that vfx shots can be sent to ILM as early as possible. (Industrial Light and Magic is one of the trend-setting vfx-companies in the world and famous because of Forrest Gump, Star Wars, Avatar and Jurassic Park, among others). During the direction stage the final shots are worked on simultaneously, meaning that they do not wait until the film will be finished.

Editing Laws
Watching and experiencing Walter Murch in real life as he works is really a most inspiring experience. Murch is a true master. As many editors already know he always edits standing up, comparing his work to conducting, brain surgery and cooking. “Chefs, conductors, and surgeons do not sit down either when working.” He claims it gives him more energy when editing, allowing his body to feel the rhythm. We discussed his editing laws in great detail, including his theories of cutting points in shots, of sounds in language, and the relation of these to eyes blinking (more in the book ‘In the blink of an Eye’). We had an interesting conversation on the difference between the Dutch and the English language and sounds, and how these could possibly influence his well-known ‘blinking theory’ of film editing. Next the issue of music or no music during editing came up. I share his opinion that an editor should be able to edit without music. Music comes in very late in the process. Film composer Michael Giacchino will compose some temporary music, the so called “mockups”, for the directors cut viewing for the producers and the studio.
A mockup is a computerfile of the orchestral arrangement as a direct indication of how the actual soundtrack will sound. When the mockups are approved, the music will be played by a real orchestra for the final mix of the film.
Being a great lover of film music myself I thought it very interesting to hear how he has worked with so many different and famous composers (also as a sound editor and mixer) and how each of them has his own way of working.

Sound
However, what fascinated me most was that, when editing a scene, the sound was switched off altogether. Murch prefers to read body language, interpreting the movements of the characters only. He also focuses on the rhythm of the shots between themselves. The editors cut is tackled precisely right from the beginning. Even a dialogue scene was edited without any sound, with the sound only switched on after the scene was edited satisfactorily. It was amazing to see that apart from a few minor details everything in the scene was right, with the dialogue flowing perfectly. This demonstrated the significance of very profound spotting, the different notes, filing cards and photographs on the wall. I have no doubt that the scene was already invented and edited in his mind, before even starting the actual editing process.

Skywalker Sound
When a scene or a sequence was completed, the sound designer of the film would drop by. Kyrsten Mate has worked on many famous films as a sound effects editor (see imdb). It was interesting to observe the very detailed consultation between both, as she would build up a large number of provisional sound effects for this editors cut.
Kyrsten Mate very kindly gave me the opportunity to visit her and her permanent workplace at Skywalker Sound, which is accommodated in the technical building on the Ranch. Here a great many films and series are edited and given sound. Besides a large number of editing and sound design rooms, there is also a large sound stage able to record a 125 person orchestra, as well as one of the technical finest cinemas in the world. I had read and heard about Skywalker Sound and now it was truly fantastic to see it and walk around.
For the temp editing Kyrsten draws from her comprehensive Skywalker sound-library and she conjured up a few of sounds from Minority Report and War Horse for me Eventually she will build a completely new sound image for the film, yet this sound was so good already that you wished you could apply it in your own films. Later in the process of this film she will join a team of six. Gary Rydstrom of Skywalker Sound will take the final mix upon him and Gwendolyn Yates is Sound Supervisor.

Ben Burtt
Kyrsten also introduced me to another icon in the film world. Ben Burtt is a sound designer/sound editor/mixer/film editor, famous for his design of the sounds for Star Wars, E.T. and Wall-E. The day I stepped into his pleasant room (full of souvenirs of many exceptional films), he was archiving sounds recorded in the seventies and eighties. He was making preparations for the new Star Wars film, soon to be shot by director J.J.Abrams. For an hour we talked about making films, directors and the differences between the past and today. A tremendous personality with a great sense of humour, Ben Burtt pressed home to me once again how extraordinarily lucky I was to visit this Ranch because – according to him – it almost never happens.

A legend at work
Back editing Tomorrowland, Walter Murch told me quite a lot of interesting details that greatly matter to him in his work. He reminisced about the different directors -and their methods – he worked with. But also about how he deals with complex scenes. A pre-edit by his assistant was discussed and a new version was made following the new instructions. Spotting the last shot material in a small cinema once more, I had the opportunity to see how he considered his spotted material again thoroughly, and how he made notes in order to be able to edit his last scenes.
Walter Murch is an outstanding character, friendly, quiet and highly intelligent. What a marvellous encounter to see this legend at work: sound switched off and standing up: And I stood next to him!